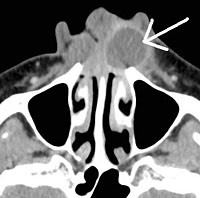 A patient with an acute naso-labial swelling

A patient presented herself with a painful swelling in the left nostril and next to the nose. It appeared to be a rarely occurring naso-labial cyst. This has to do with a developmental disorder resulting from a persistent embryonic glandular duct epithelium. The cyst was drained under local anaesthetic and was removed 3 months later, under general anaesthetics, by an oral and maxillofacial surgeon and an ENT-specialist working together.