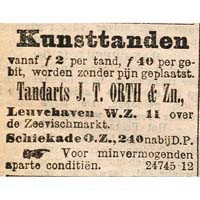 The dentists’ image. Is history repeating itself ?

Each generation likes to see itself as unique and thinks that the conditions under which people live and work are also unique. This position does not, for the most part, apply to dentists. Two questions which are now under discussion were also under discussion in the past. In the first case, this has to do with whether dentistry should be seen especially as a profession in which skill and competence are central, or as a medical discipline in which science (too) is central. The second question which was posed in the past as it is now is whether the dentist is seen especially as a salesman, albeit as a healthcare provider. Both questions are of the greatest significance for the image of dentists and also perhaps indirectly for the future of the professional group. Indeed, the answer to these questions has determined in the past as well as now the image of dentists and the degree to which the government has believed that dentists could be replaced by less highly educated non-dentists. For that reason, a clear answer to these questions ought to be formulated. It is possible that the answers given to these same questions in the past will be helpful in formulating answers now.