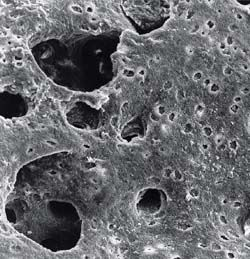 A few decades ago, relatively little was known concerning the pre-eruptive spatial development of permanent molars. The material that formed the basis for this study consisted of 114 dry human mandibles of young children and adolescents. Measurements were made on radiographs of the bony crypts in which the tooth germs had existed ante mortem and the pattern of spatial development was studied macroscopically and histologically. The findings revealed a consistent developmental pattern, in which the means of expansion of the crypts of the second and third molars, prior to crown-calcification, displayed strong similarities. The displacements as they were indicated by the measurements on the radiographs were confirmed by the macro- and micro-morphological study of the bone surfaces. The mesio-distal relationship of adjacent crypts appeared to be influenced by morphological characteristics of the mandible early on in their development. New insights have not been achieved subsequently, up to the present day, because little follow-up research into the spatial development of the bony crypts has been undertaken.